ADVERTISEMENT
Rolling in the Dough: What's Adele's Net Worth? 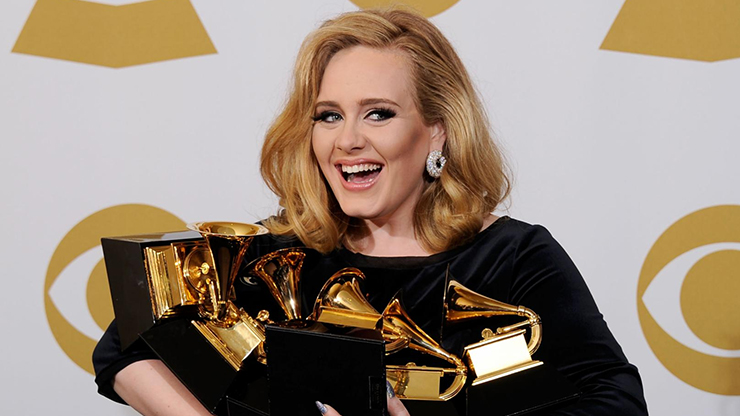 She’s sold a whopping 120 million records and counting, has 15 Grammy Awards and nine Brit Awards to her name, and was dubbed Billboard’s Artist of the Year three times all before she hit the age of 30. Adele is a certified mega star, and it’s no surprise she has the bank account to match.

Sources estimate the gorgeous performer’s net worth at about $200 million. But how did she amass all that wealth?

The album was an instant success, entering the British charts in the top spot and earning the artist a ton of recognition. Soon, Adele started touring, and her meteoric rise was underway.

Now Adele has four albums under her belt. While many artists struggle to make a living from album sales alone due to the miniscule royalties forked over by record companies, 30 was released under Adele’s own company, Melted Stone, with some support from Columbia which supports Adele’s industry efforts in America. That move alone likely boosted Adele’s take-home pay from just 10-15% royalties to a whopping 50%.

Touring has also been a major source of income. Adele’s 25 tour ran from 2016 to 2017 and generated a reported $252 million thanks to a combination of impressive ticket and merch sales. Adele smartly acts as the sole director of the company in charge of her tours, which means her cut of the $128 million tour profits amounted to about $74 million. Break it down, and the sultry singer was banking approximately $685,000 per night as she sang her way around the world.

Adele also just signed a deal to headline a residency in Las Vegas in 2022, and insiders say she’ll be pocketing between $1 and $2 million every time she steps on stage for her “Set Fire to the Fire” show at the Colosseum at Caesars Palace.

One considerable financial set came paired with a major heartbreak. Adele separated from her long-time partner Simon Konecki in 2019. The couple, who had been together for seven years and welcomed a son Angelo in 2012, finalized their divorce in 2021, with a source spilling that Adele was ordered to pay her ex $140 million in the wake of the split.

Still, with her newest work making major waves and plenty of performances on the horizon, it’s safe to say that Adele will be saying “Hello” to a lot more money in the near future.

Recommended by
At 76, Jacqueline Bisset Will Make Your Heart Skip A Beat
Old Hollywood Photos We Never Saw Until Now
31 Vintage Photos No Longer Censored
ADVERTISEMENT