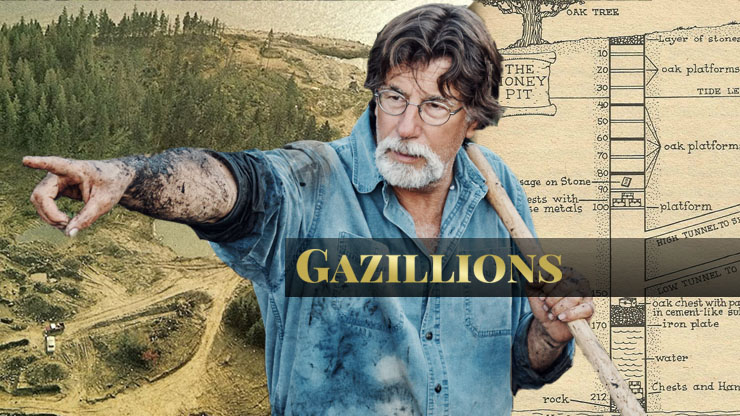 How Rick Lagina Made His Money

Rick is retired and has a pension with the United States Postal Service. He also gets paid $100K every time a new episode of his series 'The Curse of Oak Island' airs on television. Mr. Lagina has also found a few precious items including a Rhodolite Garnet brooch that's half a millennia-old, faceted gemstone that may have ties to Marie Antoinette's lost jewels.

Rick Lagina has a much more humbling bank account than his brother, but still, $10 million is nothing to scoff at.

MTV might have brought reality television into the many households throughout the United States, but it has evolved to document lots of different types of stories.

The Discovery Channel and History Channel have brought shows about lions prowling the Savannah and digging through people's junk to find antiques worth tons of money. The History Channel is also the home of a program called 'The Curse of Oak Island which first aired in 2014.

The Mystery of Oak Island

Essentially, the mystery of Oak Island is a bunch of lore about infamous treasure near Oak Island in Nova Scotia. The treasure has been hunted since the 19th century with rumors that the bounty contained holy relics like the Holy Grail, lost Shakespearean manuscripts, and the Ark of the Covenant.

The story goes that the Knights Templar buried the treasure on the island. Other accounts claim pirates stole the treasure and hid it for themselves.

Unusual objects have been discovered on the island. Many have been carbon-dated back several centuries. These uncovered treasures are prized but the primary booty has yet to be located.

The digging sites are seen on 'The Curse of Oak Island' which includes many different digs conducted by various individuals and groups. The first shaft, (which remains in a hidden location until this day) is referred to as 'the money pit.'

'The curse' relates to the death of several men who died in pursuit of the treasure more than a century ago. The curse states that seven men will die in the dig site. As of 2020, only six people have lost their lives.

Rick Lagina is a retired United States postal worker from Kingsford, Michigan. Rick Lagina is the driving force behind the History Channel reality TV series 'The Curse of Oak Island,' but co-stars with his brother Marty Lagina. His obsession with Oak Island came about after reading an article about it in Reader's Digest at the early age of 11.

The Reader's Digest article discussed the Restall family history that invested a lot of time, money, and energy into finding the Oak treasure. Together with his brother, Marty, they run the Oak Island Tour company and control the island.

The show discusses the many potential sources of the treasure. The most probable of the theories relate to North African gold merchants operating during the 12th century.

Marty has bankrolled most of their treasure hunts. Marty Lagina founded the Terra Energy company which sold for almost 60 million dollars. The sale helped Marty create a wind energy company called Heritage Sustainable and is the biggest wind-producer in Michigan and a sizeable competitor throughout the mid-western United States.

Treasure hunting in the remote part of Nova Scotia where Oak Island is located is not cheap. The majority of the cost is shouldered by Marty Lagina and his business associates. The revenue brought in from charitable grants and money earned from the television series on the History Channel help to cover some of the costs, but without his brother, his dreams of finding the cursed treasure would be over! Marty is a producer on 'The Curse of Oak Island,' and is very invested in the potential of this interesting piece of real estate.