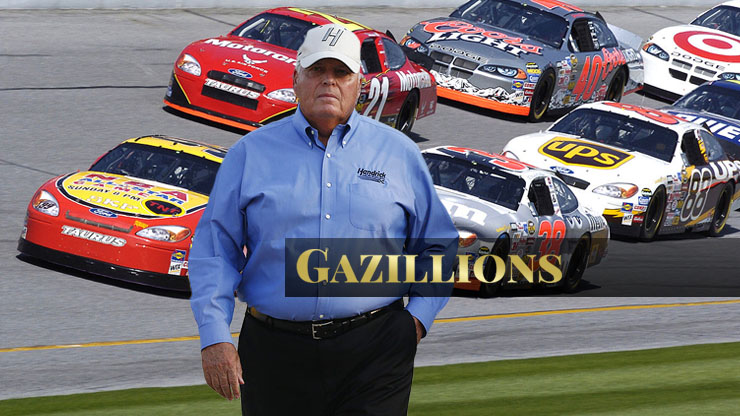 How Much Is Rick Hendrick Worth

How Rick Hendrick Built His Net Worth

Today Rick Hendrick is known to have a net worth of about $1.1 billion dollars, but he wasn't always a billionaire. He grew up in a farmhouse in Warrenton, North Carolina. Hendrick always had a love for cars and won his first drag racing competition at the age of 16. He started driving in a Chevrolet he built up himself, and while he considered himself a professional baseball player in high school, cars continued to draw them towards him.

After graduation, he opened a small used-car lot with a buddy and named it the Hendrick Automotive Group. This small lot would become the foundation of the largest private dealership in the United States. In 2009, the company had revenues of over $3.5 billion, which is what led Hendrick towards building his own Nascar team.

Before all that could happen however, Hendrick first had to keep working on his car lot, which coincidentally made him the youngest person to own a Chevrolet lot in the US. In 1970, Hendrick created a drag boat racing team that won three championships in a year which encouraged him to reach for bigger things. Next, he started competing in the NASCAR model Sportsman Series and eventually took home a victory with Dale Earnhardt.

Now he manages his own team as an owner, but his extensive career beforehand has led him to be considered one of the top team owners in the history of NASCAR. Throughout his career, he won 16 Driver's Championships, held 245 pole positions, and had 296 race wins.

The 1980s was one of his most prolific decades as an owner when he watched Sarel Van der Merwe take an IMSA GTP Corvette to victory. The powerful team had a series of wins and helped Hendrick become one of the top names in the NASCAR world. Today he has four drivers who race the Monster Energy NASCAR cup series full time.

Towards the end of the 1980s, Hendrick drove in both the Busch Series and the Winston Cup Series which were some of his last races. Outside of racing, Hendrick is also known for his philanthropy and for helping to raise the profile of bone marrow donation. He started the "Hendrick Marrow Program in 1997 to help bring attention to the National Marrow Program. It raised a lot of funds and attention as many new people signed up to be potential marrow matches.

Today Hendricks is valued to be worth over a billion dollars, and a lot of that came from his work at Hendrick Motorsports in addition to his car lots. His NASCAR team is considered to be one of the most valuable with 11 championships under its belt and worth of over $450 million.

In 2011, Hendrick and his wife were in a plane crash after their plane landed long at the Key West International Airport in Florida. His wife only suffered minor injuries, but Hendrick was not so lucky. He ended up with a fractured collarbone and three broken bones. Ironically, his son had died seven years earlier in a plane crash that occurred in Virginia. In that accident, the private plane missed the approach and crashed into mountainous terrain killing all ten people aboard.

Rick Hendrick's long and lucrative racing career earned him a spot in the 2017 NASCAR Hall of Fame inductee class. In early 2020 he was also inducted into the Motorsports Hall of Fame of America. Today Hendrick is still busy at the reins of Hendrick Motorsports, but now that he is in his early seventies he is aware at some point he will retire. He announced in an interview that he is training one of his long-time drivers, Jeff Gordan to take on his role at Hendrick Motorsports.

However, he immediately followed his announcement with a reassurance that he doesn't plan on going anywhere soon. He said that he loves everything about his automotive business and his NASCAR team, and as long as his health remains good he has no plans to walk away from either. While this may be his new plan, Hendrick had originally planned to step away from the NASCAR team and allow his son to pick up the reigns, but after his death, that idea fell by the wayside.