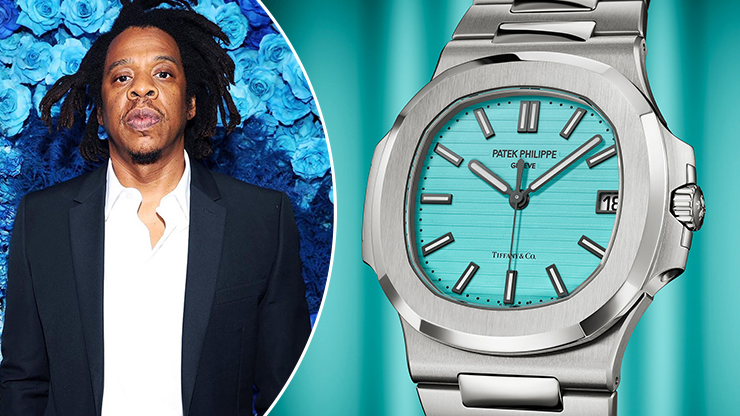 He’s owned clothing lines, beverage companies, sports teams, real estate, and of course a record label, and now rapper-turned-entrepreneur Jay-Z owns one of the most coveted accessories available on the market today.

Beyonce’s hubby, born Shawn Corey Carter, showed up to a special screening of The Harder They Fall this week wearing the brand-new Tiffany Blue Patek Philippe Nautilus 5711 watch. The collab was just announced last week when legendary watchmaker Patek Philippe spilled all the details of the limited-production creation. The company only created 170 of the stunning watches, which feature a dial in the iconic Tiffany blue. Given Jay-Z’s role as a Tiffany & Co. brand ambassador (an honor he shares with his hit-maker wife), it’s no surprise he’s one of the first superstars to sport the highly coveted gear.

Adding to the frenzy is the fact that this release is the last Nautilus Ref. 5711 the Swiss watchmaker will ever make following their decision earlier this year to discontinue the line.

As for the price tag, the Tiffany Blue watch retails for $52,635, but given the exclusivity, resellers are already putting their scores up for sale for much, much more. Case in point: One of the watches went on the auction block last weekend and sold for a jaw-dropping $6.5 million.

Whether he purchased the watch or got it as a gift from Patek Philippe or Tiffany, it’s no surprise Jay-Z has nabbed such a sought-after piece before everyone else. The former Def Jam CEO is known for his love of the finer things in life.

Oh, and then there’s his $20 million private island off the coast of Florida.

With an estimated net worth in the neighborhood of $1.4 billion, Jay-Z can probably buy all the watches and golden animals he wants.

Recommended by
Time Has Not Been Kind To These Celebrities
At 76, Jacqueline Bisset Will Make Your Heart Skip A Beat
21 Pics That Prove Country Girls Rule
ADVERTISEMENT