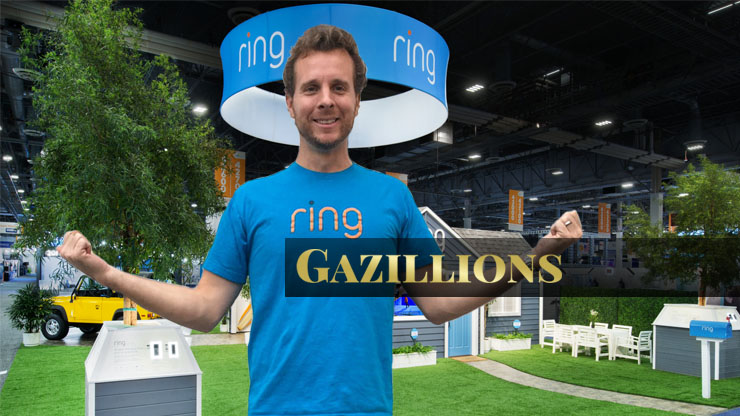 How Much Is Jamie Siminoff Worth

How Jamie Siminoff Built His Net Worth

Jamie Siminoff is the creator of Ring and a multi-millionaire who turned down an offer famously on Shark Tank. It turns out he made the right move, because three of the sharks rejected his Wi-Fi doorbell ringer, and one, Kevin O'Leary made him a low offer that would have been nothing close to his net worth today. Jamie knew he had a good product on his hands, he just had to do some fine-tuning to get it to the wider market. The Doorbot became the Ring, and suddenly it shot off and became a household staple in many neighborhoods.

Once he changed the name the popularity of the product skyrocketed, and he quickly sold a $5 million product. It is likely that his exposure on Shark Tank also helped, since people saw the product and wanted to see more about it. The widespread attention that Ring was suddenly getting attracted big-time investors like Goldman Sachs and Richard Branson who invested a whopping $200 million that helped the product go national. By the end of 2018 Amazon had its eye on the smart device, and Jamie wisely took their offer to buy the company for an estimated $1.2-1.8 billion dollars.

At this point it is widely accepted that Jamie owned about 20-30% of Ring after the investment deals, so he probably grossed somewhere between $360 and $540 million dollars from the sale. This left him a comfortable millionaire with an estimated net worth of about $310 million. This is a lot more than he would have earned if he took Kevin's deal on Shark Tank, so turning down that offer was probably the best thing he ever did. Even more astounding is the fact that Jamie created the original prototype while tinkering in his garage one day, so one small idea led to his new life as a multi-millionaire.

Despite his millions, Jamie is still pretty down to earth. In fact, while a lot of people would go out and buy a sports car or a mansion, Jamie's big purchase was a tripped out mountain bike. Granted, $8,000 is steep for a mountain bike, but it was the one thing that he really wanted: a specialized S-works Epic mountain bike.

Fittingly, Jamie got a second shot to be on Shark Tank, but this time as a celebrity judge. For now, he is looking at other potential inventions that could help him create another market-changing tool. He never took the title of CEO at Ring, but instead Chief Inventor because he believes that is where he is at his best.