ADVERTISEMENT
How much does it cost to AirBnb the Home Alone House? 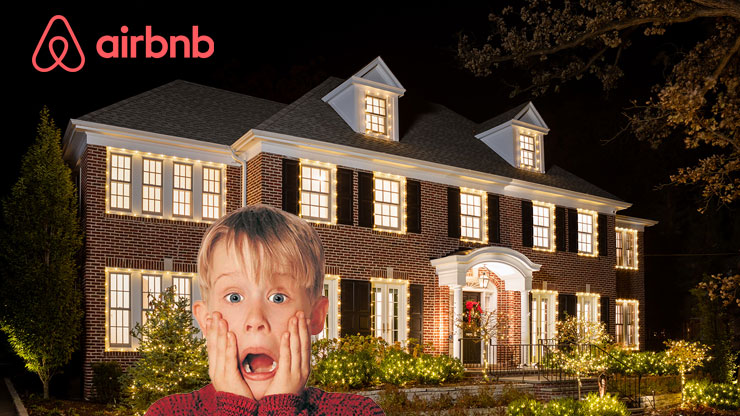 Longing to spend the holidays somewhere different this year?

Forgot some pricey all-inclusive resort and ditch the skis and parka because there’s a new option in town and it’s bound to make 90s film fans jump with glee and maybe even scream, “KEEEEVVVVIIIIIIIIIIN!!!”

The house that played host to the McCallister family and the bumbling burglars the Wet Bandits in the iconic film Home Alone is now available to rent. The property, located in suburban Chicago, is only available December 12 and costs just $25.

The rental scheme comes courtesy of actor Devin Ratray, who played the bullying older brother Buzz in the now-classic movie about a chaotic family that accidentally left their young son behind when they flew off to Paris for the holidays. Kevin, the young son played by 90s icon Macaulay Culkin, has to learn to fend for himself as well as fending off would-be robbers using a slew of inventive gadgets and somewhat dangerous homemade weapons.

Ratray announced the Airbnb opportunity in a statement, saying, “You may not remember me as particularly accommodating. But I’ve grown up, and I’d be happy to share my family home — my pizza, even — with you this holiday season. Just try not to let my tarantula, Axl, lose this time.”

Whoever snags the overnight stay will get more than an empty home as their prize. Airbnb promises guests “a cozy holiday scene” replete with Christmas décor, a souvenir LEGO set, and even dinner a la Kevin with a tasty Chicago-style pizza and microwave mac and cheese. Oh, and there will be a real tarantula too — whether that’s a perk or a deterrent remains to be seen.

Booking opened up Tuesday December 7 at 1pm CT, which leaves just 5 days for potential renters to get their bodies and their belongings to Chicago for the December 12 stay. Airbnb is holding back the exact address until the booking is complete, but the property listing puts the house in the Northern Chicago suburb of Winnetka.

As a final incentive, Airbnb has promised to make a one-time donation to Chicago’s La Rabida Children’s Hospital in honor of this nostalgia-filled event.

The Home Alone house isn’t the only famous abode up for rent this season, either. Anyone who prefers a less idyllic spot to celebrate Christmas can book The Grinch’s Cave, a rocky outcrop decorated to echo the Grinch’s very Grinchy aesthetic including G-initialed slippers, an organ, and that sophisticated coffee machine usually run by long-suffering Max.

The Grinch property is offered by vacation rental company Vacasa for just $19.57 per night.

Recommended by
Old Hollywood Photos We Never Saw Until Now
They Were Famous In The '90s- Where Are They Now?
31 Vintage Photos No Longer Censored
ADVERTISEMENT