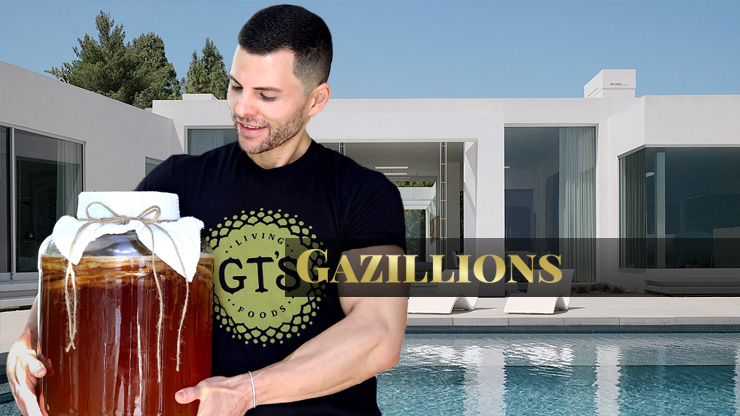 How Much Is GT Dave Worth

How GT Dave Built His Net Worth

GT Dave is a great example of purpose-driven innovation that turns out to be a goldmine. That is exactly what the King of Kombucha (GT Dave) has accomplished. Oddly enough, his story begins before his birth.

An American couple (Michael and Laraine Dave) and their two sons were struggling with their son Justin's life-threatening heart condition in 1977 when they decided to throw out the birth control pills and let fate decide their future.

Luckily, Justin's health improved after GT Dave was born in 1978. The Dave family practice and honor the Eastern religious doctrine of Buddhism. Laraine and Michael often took their children to a sacred ashram in India.

The family was gifted a kombucha mother by a Buddhist nun and that is where the story of the Kombucha King officially begins. The kombucha mother is technically called a SCOBY (Symbiotic Culture of Bacteria and Yeast). They are also referred to as kombucha mushrooms but they all define the same probiotic gem.

As of 2020, GT Dave's net worth is estimated to be roughly $1 billion dollars. GT Dave lives the good life in Beverly Hills, California. He drowns his system by drinking eight to twelve bottles of his kombucha every day and to this day still tastes tests each batch.

As a way to standardize the identity and to protect the integrity of his product, his company donated one million dollars to Kombucha Brewers International in 2019.

For a high school dropout, GT Dave's net worth challenges the idea that you need an education to prosper. GT Dave is worth a cool billion. Dave has single-handedly created an industry experiencing weed-like growth.

Today, people like Gwyneth Paltrow and Reece Wetherspoon can be seen and photographed drinking GT Dave's remarkable beverages. Inc.'s analysis states that consumers will buy roughly $600 million worth of kombucha in 2020.

Considering GT Dave only had one loan of $10,000 from his mother and turned that investment into a billion-dollar industry is incredible. GT Dave's products are not just in Whole Foods anymore but in places like local health-food stores and Wal-mart, and Krogers.

If you haven't had kombucha before it is worth a try. The unusual taste isn't unpleasant and does provide an immune boost.

What is Kombucha and why do so many People Drink it?

Kombucha grows from feeding on tea, sugar, and yeast. The Kombucha mother is a slimy disc that develops a beneficial probiotic for human consumption. If you have tried a Kombucha tea before you might have noticed a few bits of material floating around in your drink, that is the SCOBY or Kombucha mother.

Historians claim Kombucha developed in North-Eastern China (historically known as Manchuria) in 220 BC. Other experts claim that around the same time a Korean physician, Dr. Kombu invented the drink to help relieve the Japanese Emperor Inkyo with his health issues.

A Weapon Against Cancer

It is important to note that the scientific evidence to support the health benefits of Kombucha has not been completed. The health claims are entirely anecdotal and are not supported by oncologists.

However, many people report enhanced health after drinking organic, raw kombucha. Laraine Dave is one of those people. In 1995, she was diagnosed with an aggressive form of breast cancer. Laraine Dave survived a Lumpectomy and an entire year of radiation and chemotherapy.

Thankfully, cancer did not spread which the Dave family attributes to the homebrewing and continual consumption of Kombucha. GT Dave did receive some flack for this unconventional beverage. Some of his peers referred to his clan as 'The Addams Family,' but that is a small price to pay for beating cancer.

There is evidence that Kombucha offers health benefits like other teas because it is rich in antioxidants and polyphenols. These compounds are found in green tea. Studies demonstrate people who drink green tea routinely are less likely to develop breast, colon, prostate cancers.

Unfortunately, GT Dave's older brother Justin died from bone cancer in 1996. Dave's parents' marriage dissolved and his relationship with his mother grew into a deep bond.

In fact, Laraine's cancer recovery is instrumental in the marketing materials of GT's Living Foods. His eldest brother, Adam, graduated from Louisiana State University's medical school in 2008 and is helping people through medicine.

In grateful response, GT Dave wanted to share Kombucha with other folks who were fighting similar health battles. He left high school without a diploma, opting for a GED instead, and began focusing on how to mass-produce and market the probiotic tea.

GT Dave was a pioneer when it came to putting kombucha on grocery shelves. He sold his very first batch of 24 bottles to the Erewhon Natural Foods store in 1995. The product flew off the shelves and basically sold out that very same day.

He worked from his family home. Endlessly calling potential buyers from store owners, distributors, and other would-be clients. GT Dave even changed his voice to pretend he had a staff.

Laraine routinely visited stores by setting up a sample station where she shared her story about overcoming aggressive breast cancer. By Christmas time in 1997, Dave was selling more than 50 cases every day.

It was obvious to Dave it was time to expand. GT Dave invested in renting a large industrial site in Gardena, California. Soon he was hiring employees. The popularity of Dave's tea caught the attention of Whole Foods buyers who contacted him about selling his kombucha.

Dave wasn't certain about allowing Whole Foods to take on his product. He was worried that the quality and health-enhancing aspects of his drink would suffer. But after a heart to heart with Whole Foods' executives, he decided to take their offer and the kombucha empire was born.

Dave's Kombucha spread throughout grocery stores across the Southwestern United States. He had to rent another large industrial site to accommodate the demand. Other problems popped up as the demand continued to expand. He struggled with the traditional brewing method of kombucha and to maintain the hands-on approach to making the fizzy tea.

As the growth spiraled into massive proportions, Dave's kombucha was rebranded as GT's Living Foods. As of 2020, the 100,000-square-foot manufacturing site in Vernon, California produces more than one million bottles every year.

Dave refused lots of different acquisition offers and remains the primary owner of GT's Living Foods which is worth over $900 million and owns 40% of the kombucha tea market in the United States.