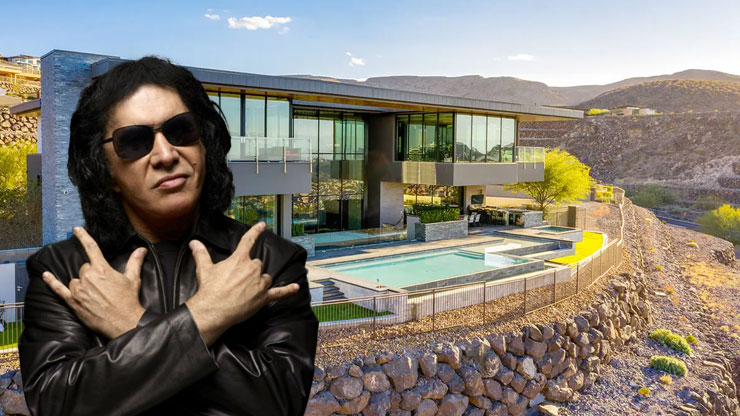 The iconic rocker has put his massive Nevada mansion up for sale for a whopping $13.5 million, slashing nearly $1.5 million of the price tag originally attached to the property when it went on the market earlier this year.

As for why the long-tongued singer is abandoning Sin City, he says it has to do with his family’s refusal to live in the home while Simmons is on tour. “They’re not gonna put up with the heat, and down the street, there’s strippers and stuff like that. They don’t wanna deal with any of that.” (Las Vegas is situated in a basin in the Mojave Desert, and temperatures regularly hit triple-digits in the summer months.)

Clearly the performer, known by fans as The Demon, still cares about who purchases his stripper-adjacent former abode, as he says he'd like to meet the person who asks to buy it. “I don’t wanna just hand it over to some knucklehead. I want you to enjoy it and have a good life.”

Thanks to the property's huge array of amenities, the good life is practically guaranteed to anyone lucky enough to move in. The two-story home boasts an incredible panoramic view of the Las Vegas Valley and legendary strip plus a wealth of modern architecture dedicated to “privacy and exclusivity,” according to Evangelina Duke-Petroni, a listing broker from the Ivan Sher Group.

In addition to a jaw-dropping floating entryway that takes guests over a pond stocked with koi fish, the mansion includes six bedrooms, eight bathrooms, floor-to-ceiling windows that almost completely remove the barrier between the inside and outside of the house, an adjoining 11-car garage, and desert-friendly artificial turf that should satisfy frugal buyers and eco-friendly home shoppers alike. The expansive outdoor living area includes a built-in grill, plenty of seating, and an infinity pool.

The new owners will also get the extra half-acre lot Simmons bought next door and filled with 137 trees, a move that cost him an extra $1 million.

Fans wondering where Simmons is off to next will have to ask the outspoken musician himself, as he seems to be unsure. Despite saying he wanted to move out of California to escape the sky-high taxes, he just purchased a $5.8 million property in Malibu this past March. He and his wife, model turned actor Shannon Tweed, also own a huge mansion with four acres of land in Lake Tahoe.

When asked if he would consider buying a different home in the Vegas valley, Simmons responded with a pithy, “Can you speak with God and change the weather?”

Simmons and his Kiss bandmates are currently traveling the world on the End of the Road tour which doesn’t wrap up until July 2022.