ADVERTISEMENT
From Dance Moms to Babysitter - How Much is Jojo Siwa Net Worth?
ADVERTISEMENT 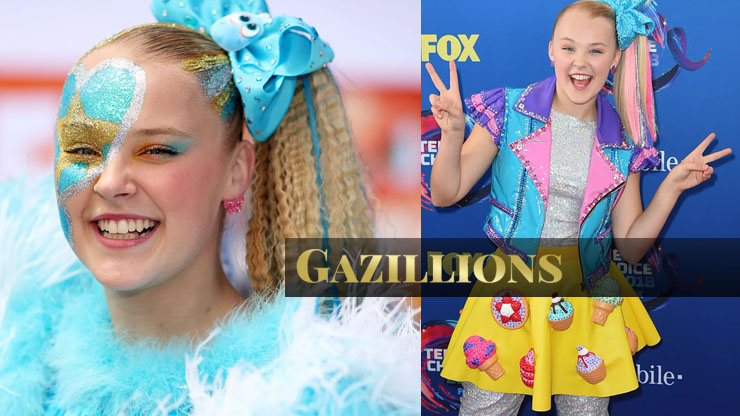 Jojo Siwa is a lot of things. She is a YouTube star, reality TV star, model, singer, actress, and millionaire. What is most impressive though, is she is only 17. Jojo has been marketing herself as a brand since she was a small child on the reality show Dance Moms, and it has clearly paid off as Jojo Siwa now has a net worth of a whopping $14 million. So how did she go from a toddler dancing to a millionaire with millions of fans? Let's take a look at her impressive journey and how she has chosen to spend some of her hard-earned cash along the way.

Before becoming a bow touting household name, JoJo appeared on the show Abby's Ultimate Dance Competition which eventually led her to get a highly coveted spot on Dance Moms. Eventually, she earned a series regular spot which helped her start building her bank account, but the show didn't end when she stopped dancing for the famed Abby Lee Miller.

Jojo Siwa Partners with Nickelodeon to Build Her Profile

Jojo Siwa's net worth kept growing even after her tenure on Dance Moms due to her smart decision to partner up with Nickelodeon and gain access to a much larger audience. She released two hit music videos for the TV network titled "Kid in a Candy Store" and "Boomerang" before deciding to leave Dance Moms for good. Coincidentally, the song "Kid in a Candy Store" is not too far from the truth given the mega popstar actually has a candy store located within her own mansion. She truly is living the life all kids dream of in an idyllic rainbow mansion.

In 2017 the starlet officially signed with Nickelodeon and starred in Blurt! Along with starring in Lip Sync Battle Shorties next to Nick Cannon. This allowed her to start releasing a massive amount of colorful hair bows which led to a huge burst in her fan base.

In the background of all of her TV appearances, JoJo was steadily growing her personal brand independently on YouTube which is another reason that Joja Siwa's net worth is so high. Currently, she has over 11 million subscribers who tune in to watch her visits that show her personal life and plenty of fun songs and dances. In fact, the video she did for Boomerang has been viewed over 862 million times to date.

Fun fact, while Jojo is capable of earning thousands in a day by simply posting to YouTube, she also takes some time out to do some ordinary teenage things. The reality star actually babysat Kim Kardashian and Kayne West's oldest daughter, North West, and of course, filmed it. She probably got paid a lot more than what Kim paid her, given her video from the day amassed an impressive 36 million views.