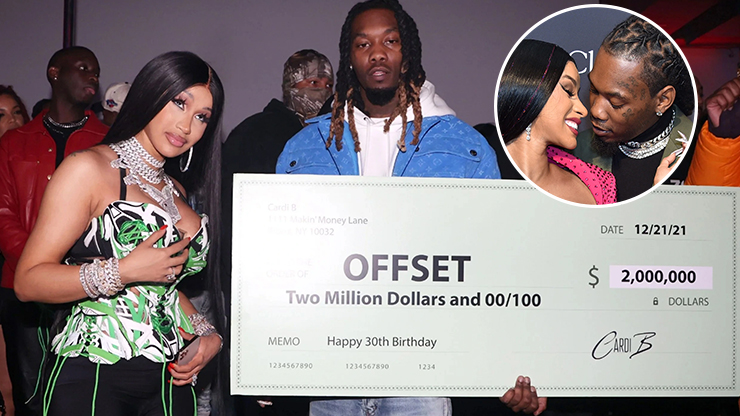 Most people get their spouse something nice for special occasions, like taking them out to a fancy dinner or even springing for a blinged-out piece of jewelry, but Cardi B is taking gifting to new levels of OMG.

The rap superstar, born Belcalis Marlenis Almánzar, just gave husband Offset a whopping $2 million to help him celebrate his 30th birthday. Cardi posted a video on social media that showed her speaking to a crowd that included big names like The Game, Kanye West, French Montana, and Quavo, all gathered at a wild party thrown in Offset’s honor at a club in L.A. In the footage, the famously outspoken performer wonders aloud what her hubby might want for his birthday before saying, “I know you got a lot of business ventures coming in 2022, so let’s get it. Bring out the birthday cake!”

But rather than receiving a sweet treat, Offset (who was seen gripping a bottle of tequila as his wife saluted him from the stage) watched in shock as someone brought out a giant check with his name on it.

The gift may seem over the top to the average Joe, but for Cardi B, the massive check will barely put a dent in her overall net worth. Thanks to her incredible career as a recording artist, appearances on TV shows like Love & Hip Hop: New York, and lucrative deals with everyone from Fashion Nova to Alexa — and let’s not forget about that crazy popular Pepsi Super Bowl spot — Cardi is worth an estimated $40 million.

In the weeks after his birthday, Offset hit up his own Instagram to show followers his other gifts, including something special from restaurant chain Popeyes, which has an ongoing deal with the Migos rapper, as well as signed sneakers and a pricey bottle of booze courtesy of Lebron James of the L.A. Lakers.

The pile of loot joins the other extravagant gifts Offset has received from his sassy sweetheart over the years, including a $250,000 ‘Bando” pendant, a Rolls Royce Wraith, a rare Lamborghini Aventador SVJ, and another half million in cash for Offset’s 28th birthday in 2019. That money was literally doled out in cash form — Cardi stocked their fridge with money, then suggested Offset could use it to buy a car, clothes, or more jewelry for himself.

And the gift-giving goes both ways. Since the couple first got together in 2017, Offset has given his love a $60,000 chain necklace, a bunch of hard-to-get Hermes Birkin bags, a 100-carat diamond ring modeled after the Heart of the Ocean jewel from Titanic estimated at $1 million, a diamond-encrusted watch, seven pairs of Christian Louboutin red-bottom shoes (one for every day of the week), and a sprawling 6-bedroom, 7.5-bath mansion in the Dominican Republic.

As Cardi said in her video, “[Offset] literally got it all,” and he’s not the only one!