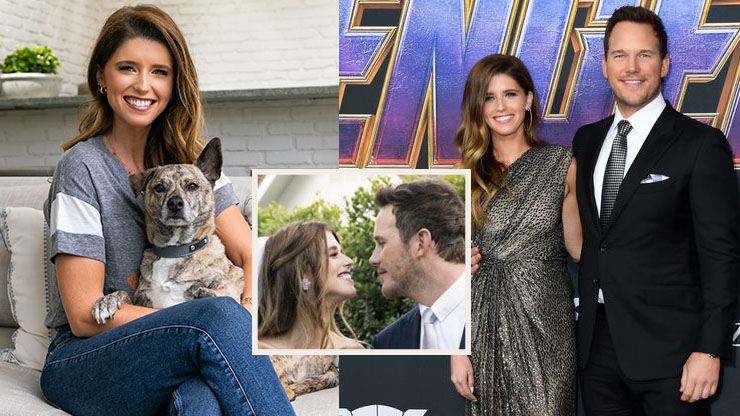 Katherine Schwarzenegger and Chris Pratt's path to romance has been rocky, to say the least. But it's certainly worked out well for the both of them.

For his part, Chris married his Take Me Home Tonight co-star Anna Faris in 2009, who gave birth to their first son, Jack, in 2012. Shortly after their marriage, however, Chris began his ascent to super-stardom. 2009 was the same year he started playing Andy Dwyer in the TV show Parks & Recreation, and his star exploded when he landed the part of Star Lord/Peter Quill in 2014's Guardians of the Galaxy, followed up by the lead character and velociraptor trainer Owen Brady in Jurassic World in 2015.

Though Chris was living the dream, he and Anna weren't. Rumors swirled that Chris might have been unfaithful to her. Though these rumors have never been confirmed, the pressures of stardom eventually got to the couple, who called it quits in September, 2017.

Just three months later, Chris began dating the daughter of another movie star: Katherine Schwarzenegger, daughter of Terminator star and former Governor of California Arnold. Katherine's mother, Maria Shriver, was behind the match. She suspected the two would get along, and set the pair up shortly after Pratt's divorce finalized. Chris, anxious to impress his girlfriend's father, asked to work out together. Reportedly, Arnold was so impressed by Chris' ability to do an inline press that he gave his blessing to the pair.

Katherine, who graduated from the University of Southern California in 2012, has published several self-help books, including Rock What You've Got: Secrets to Loving Your Inner and Outer Beauty from Someone Who's Been There and Back and I Just Graduated . . . Now What? along with the children's book Maverick and Me. Her most recent title, The Gift of Forgiveness: Inspiring Stories from Those Who Have Overcome the Unforgivable, came out in March 2020, and details how people like Elizabeth Smart and Sue Klebold (mother of one of the Columbine shooters) found peace and forgiveness after their trials.

The pair was obviously well-matched, and after Arnold approved of the union, Chris and Katherine married in a private ceremony in Montecito, California in 2019. The couple welcomed their first child, Lyla Maria, in August 2020, and have hinted she'll soon have a house full of siblings. They currently live in Los Angeles, where Chris can be near his son Jack..

While Chris prepares to reprise his role of Star-Lord in Guardians of the Galaxy 3, Katherine devotes her time to raising their daughter, wring, and working in animal advocacy. She's an ambassador for the American Society for the Prevention of Cruelty to Animals, and supporter of noted animal rescue Best Friends Animal Society. Both Chris and Katherine are devout Christians; Katherine is a practicing Catholic while Chris attends the non-denominational Zoe Church. They both credit God with bringing them together and part of what makes their marriage work