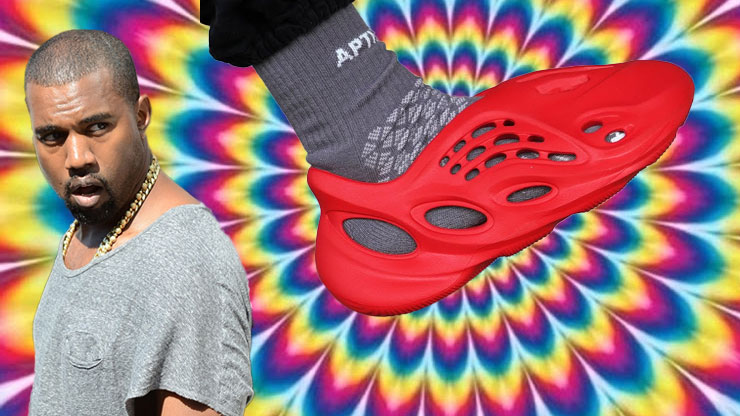 When the man formerly known as Kanye West released his instant classic Air Yeezy 2 “Red October” footwear in 2014, the bold scarlet-and-gold shoes sold out in a heartbeat. The surprise drop — the last of West’s collabs with Nike before he partnered with Adidas — currently sell online as collector’s items, some nearly hitting the $50,000 mark. Not bad for a shoe that was originally panned, with critics calling it the “Yeezy Croc.” Ouch.

Now Yeezy fans with shallower pockets have a new opportunity to grab some iconic sneakers. The newly named Ye has just released a red version of his futuristic Foam Runners. The shoe, officially called the “Vermillion” colorway, is the latest interpretation of a style already sported by celebs like Justin Bieber and Kim Kardashian West.

The eye-catching design of the Yeezy Foam RNNR looks almost skeletal. The shape itself made serious waves when it was first introduced, as did the construction. Made from algae grown in ponds in Atlanta, RNNRs are a sustainable, eco-friendly choice. Rapper-turned-entrepreneur West has even discussed plans to bring the algae production in house, saying he wants to use space at his Wyoming ranch to get better control over the entire process. West told crowds at the Fast Company Innovation Festival in 2019, “We’re going to be farming and going seed to sole.”

ADVERTISEMENT
“
“We’re going to be farming and going seed to sole.” - Kanye West

The new RNNR’s color choice makes sense to anyone following the Donda songster’s recent appearances. Ye showed up to one of his album listening events in an entirely red outfit, including a coat he designed for Gap that would later sell out in minutes.

Anyone eager to snag their own Yeezy Foams can try to buy a pair online — retail prices are set at just $80 — but they’re likely to sell out quickly. After-market versions are expected to sell from between $120 and $600, based off historic Yeezy resale patterns.