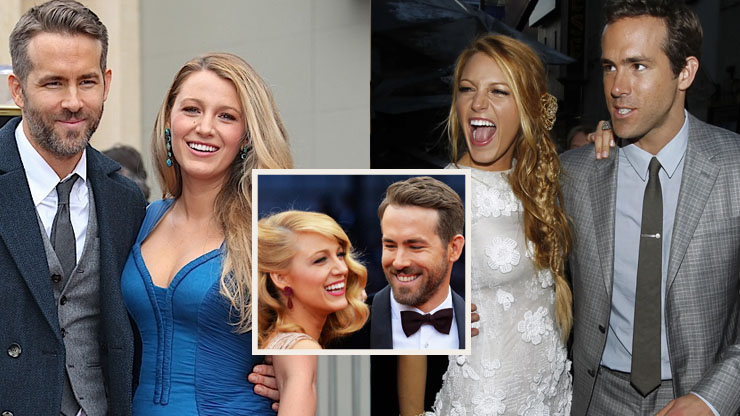 Blake Lively was born Blake Ellender Brown on August 25, 1987. Acting was in her blood, as both her parents worked in show business. Blake knew from an early age she wanted to be an actress, too, and with her brother's encouragement made her debut in 2005's The Sisterhood of the Traveling Pants. She returned for the sequel in 2008, but what really made her famous was the role of Serena van der Woodseen in the TV show Gossip Girl. She began dating one of her co-stars, Penn Badgley, while on set.

In 2010, she had another film opportunity, to portray Carol Ferris in Green Lantern. She met Ryan Reynolds on set, and though Ryan was married to Scarlett Johanssen at the time, and Blake was still with Badgley, the two developed a close working relationship. Shortly after filming wrapped, however, both actors ended their respective relationships.

Ready to get back into the dating scene, the pair went on a double date... but with different dates! Some things are just meant to be, though, and the sparks kept flying between the two. Which made things a little awkward for their dates. It's unclear who the other dates were, but Blake was spotted with Leonardo DiCaprio a few times during this period.

When things with Leo didn't work out, Blake and Ryan embarked on a whirlwind romance. The pair got hitched on on September 9, 2012 in a lovely rustic ceremony in Charleston, South Carolina. Martha Stewart Weddings reportedly helped with decorations, which isn't surprising as Blake has openly stated her admiration for the star homemaker's kindness and creativity. They made their first public debut as a married couple at the 2014 Met Gala, where the pictures indicated they were still obviously very much in love with each other.

The newlyweds grew their family quickly, welcoming baby James in 2014, Inez in 2016, and Betty in 2019. When they're not working, the pair lives in Pound Ridge, New York. Blake has continued her acting career, with her most recent release being the role of Stephanie Patrick in 2020's The Rhythm Section. Meanwhile, her husband has invested most of his time in bringing the comic book character Deadpool to life in two separate films (plus a holiday recut), with a third one recently announced.

The couple has also gotten involved in charitable efforts, donating half a million dollars to Covenant House, an organization that helps at-risk youth in Canada. They credit their relationship success with doing everything together. In a 2014 interview with Vogue, Blake said that the couple does everything in life together. Not only do the collaborate on roles, they go so far as to pick out furniture and decide what to eat while together. For his part, Ryan says he's glad they started as friends. Here's wishing the couple many happy years together!