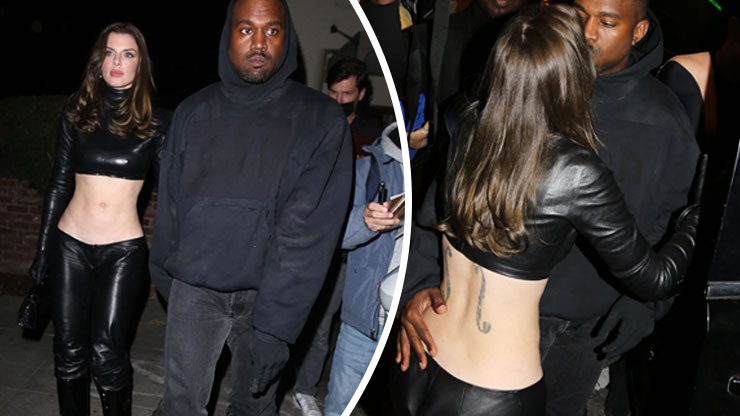 It looks like it’s Kanye West’s turn to bounce back.

Several months after soon-to-be ex-wife Kim Kardashian filed for divorce in 2021, she hooked up with SNL comedian Pete Davidson, and the two have been nearly inseparable since.

While Kanye seemed to resist the breakup at first, even using his time on stage at one of his concerts to plead for his former spouse to come back to him, he’s now been spotted on a series of dates with actress Julia Fox.

Fox, an Italian-American actress perhaps best known for her appearance alongside Adam Sandler in the crime thriller Uncut Gems, was previously married to a Brooklyn-based pilot named Peter Artemiev. The couple have a son born in February 2021. Just days before first going public with Kanye, Fox was on social media branding her ex is a “deadbeat alcoholic drug addict” who left her “with a 5 month old and a dog and a home and ALL THE BILLS.” [sic]

TMZ captured West and Fox out on a date in Miami last Saturday. Kanye, 44, and Fox, 31, dined at uber-popular restaurant Carbone. A few days later, the couple trekked to NYC, dining at the Greenwich Village outpost of Carbone after joining friends to take in a showing of Slave Play on Broadway.

One eyewitness said Fox and Ye seemed “super comfortable with each other — it doesn’t seem like a new relationship, they just seem happy and at east around each other.” The onlooker also said the couple ignored swarms of fans and photographers waiting outside the restaurant to catch a glimpse and instead chose to engage in deep conversation while they enjoyed a spread of Italian cuisine.

Friends also seem to support the pairing, saying the Donda performer “seems happier than he has in a long, long time.” But the really interesting info comes from Fox herself, who saw her and West’s dating spree in a blog for INTERVIEW magazine.

“I met Ye in Miami on New Year’s Eve,” wrote Fox, “and it was an instant connection.
Fox said her new beau is “so fun to be around.” She also described their dinner-and-a-show evening in NYC, sharing how their plan landed only an hour before curtain time at Slave Play, adding that “Ye had an entire hotel suite full of clothes” waiting for her, which he then used in a photo shoot he directed at Carbone while people slurped down pasta around them.

Fox was clearly taken with the first-class treatment, explaining that “It felt like a real Cinderella moment. I don’t know how he did it, or how he got all of it here in time… Like, who does things like this on a second date? Or any date!”

Kimye fans might remember that the former couple’s relationship started in a very similar fashion, with Kanye overhauling the SKIMS mogul’s wardrobe and frequently stepping in to “assist” on photoshoots. Whether the rapper’s love story with Fox follows a similar path remains to be seen.