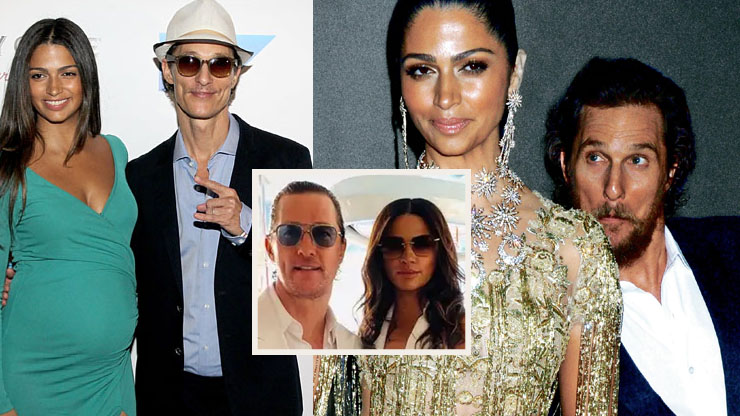 Camila Alves was born on January 28, 1982, in Brazil, and lived there until she was 15. She visited her aunt in Los Angeles that year, and liked it so much she decided to stay. She struggled for several years, working as a house cleaner and waitress while learning English. At age 19, she set out for New York City, where she dreamed of becoming a fashion model. She met with some success, appearing in Bon Jovi's Misunderstood music video in 2002.

In 2006, she found herself back in Los Angeles, visiting a glamorous Hollywood club when a man in a thick beard and straw hat tried waving her over. She didn't recognize noted romantic comedy actor Matthew McConaughey (probably because of the beard, and, according to Matthew, he'd spent the whole day at the beach). But she gave him a shot, anyway. Or sort of one.

The Language Of Love - Portuguese

For some reason, Camila began speaking Portuguese to him. Matthew didn't care, he was smitten. He somehow managed to pull together everything he remembered from high school language class and struck up a conversation with this stunning woman. Matthew impressed her enough that the two went on their first date three days later. And that was that, Matthew was smitten. "I never wanted to go on a date with anyone else," he told People magazine in a 2017 interview.

The couple gave birth to their first child, a boy named Levi, in 2008. Levi was joined by his sister Vida in 2010. By now, Matthew knew it was time to get serious. He proposed on Christmas Eve in 2011, and Camila happily said yes! They married the next summer, at their home in Austin, Texas. Levi was the ring bearer, while Vida adorable as a flower girl. Reportedly, the two whispered their vows to each other. The couple received a late Christmas gift on December 28 of that year, when they welcomed third child Livingston into their family.

Marriage and fatherhood seems to suit Matthew. Though he was successful even before meeting Camila, his career has skyrocketed since. He scored the Academy Award in 2014 for his portrayal of Ron Woodroof in Dallas Buyers Club, and an Emmy nomination for playing Rust Cohle in HBO's True Detective.

Meanwhile, Camila has continued her career in fashion. She earned US citizenship in 2015 (ironically enough, receiving her citizenship in the same ceremony as British-born Emily Blunt!). In 2010, she hosted the third season of Bravo's fashion-centric reality TV show, Shear Genius, and in 2012 became the face for Macy's line, I.N.C. International Concepts. Together with her mother, she designs the Muxo line of popular handbags. And in 2016, she launched Women of Today, a lifestyle website focusing on healthy living and encouraging women to give back to their communities. And Camila practices what she preaches! During the 2020 pandemic, Camila and Matthew distributed over 100,000 face masks to Texas hospitals.