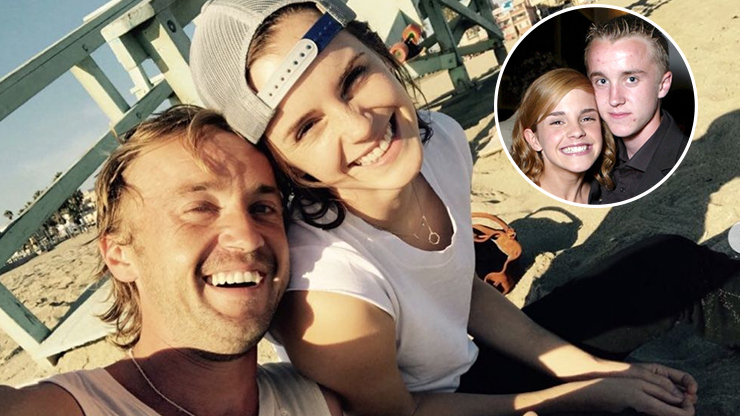 Emma Watson, who played the precocious girl wizard Hermione in the franchise, talked about her crush on Tom Felton, who played the villainous Draco Malfoy. Though this isn’t the first time Watson has admitted she had feelings for her character’s nemesis, it’s one of more intimate looks at how cast relationships developed as these young stars were thrust into the spotlight.

Interestingly, it seems like the first sparks came not on set but rather while the child actors were attending their makeshift school. “I walked into the room where we were having tutoring,” recalled Watson. “The assignment that had been given was to draw what you thought God looked like, and Tom had drawn a girl with a backward cap on a skateboard. And I just don’t know how to say it — I just fell in love with him.

The crush continued during filming, with Watson coming to work hoping that Felton would also be working that day. “If his name was on the call sheet, it was an extra exciting day.”

Unfortunately, it seems Felton didn’t share the same romantic feelings. Watson explained, “He was three years above me and so for him he was like, ‘You’re my little sister.’”

Felton basically confirmed Watson’s take, saying, “I became very protective over her. Yeah, I’ve always had a soft spot for her and that continues to this day. There’s always been something that’s like, I don’t know, a kinship.”

That kinship stretches as far back as early auditions for the Potter franchise. Watson, who was just 11 years old when she tried out for the part of Hermione, was new to the film industry and puzzled by some of the equipment. As Felton tells it, “This little girl had asked me, ‘What’s that?’”, while pointing at a large boom mic dangling overhead. Felton replied, “That’s a mic, duh.”

Watson clearly caught on quickly, garnering critical acclaim not only for her time at Hogwarts but for a diverse array of work on stage and in film including roles in Sofia Coppola’s The Bling Ring, a live-action version of Beauty and the Beast, Little Women, and The Perks of Being a Wallflower. She’s also somehow found time to earn a degree in English lit from Brown University and advocate for gender equality as a United Nations Women Goodwill Ambassador.

As for her personal life, Watson prefers to keep those details private, but she is believed to be in a long-term relationship with American businessman Leo Robinton.

Felton has found his own ongoing success as a series regular in the sci-fi series Origin as well as in a number of indie films and other TV shows. His current relationship status is unknown, but he was previously coupled up with Jade Olivia Gordon, who played his character Malfoy’s wife in the last Harry Potter movie.