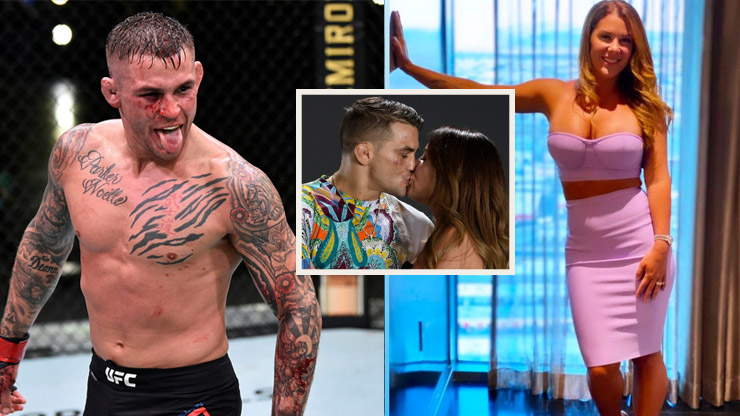 As the UFC’s Lightweight Champion (no, really, he is currently sitting at the literal number 1 spot), Dustin Poirier aka “The Diamond” has done plenty to make a name all on his own, both with his fighting skills and his philanthropic work. But Dustin is just one part of a dual power couple team, as his wife of 11 years, Jolie, is just as a formidable opponent and do-gooder as Dustin himself.

This power couple was batting eyes at one another way back before they could even drive! Meeting first in middle school, Dustin and Jolie would go on to marry when they were 20 years old, and then welcomed a baby girl 7 years later. Dustin makes a mention of “his girls” in just about every interview he does, and credits them for the success he’s found in his sports career today, gushing not only about his happy life with them, but also how they’ve kept him grounded.

Mrs. Diamond is the head haunch-o when it comes to the couple’s wildly successful charity foundation, The Good Fight. She’s not only the VP, but also the lead director for the philanthropic organization. The organization has raised thousands of dollars, and serves to help out underprivileged communities in the couple’s home state of Louisiana. And Jolie doesn’t just lead the helm on the nonprofit—she also helped catapult a brand and company of Louisiana state hot sauce that she and Dustin founded, Poirier Hot Sauce. The hot sauce brand has proved to be just as lucrative as everything else the couple touches, bringing in near 5-star reviews online.

She’s Just as Entertaining as her Celeb Husband

Jolie never shies away from being just as loud and out as any other avid fan, and it’s not just being the biggest cheerleader for her husband that she does. Jolie also participates in her fair share of what the sport is well-known for—smack-talking. Jolie does not hold back when it comes to shamelessly sliding into her husband’s rival’s DM’s and jumping in on the same rivalry mood that fans love.