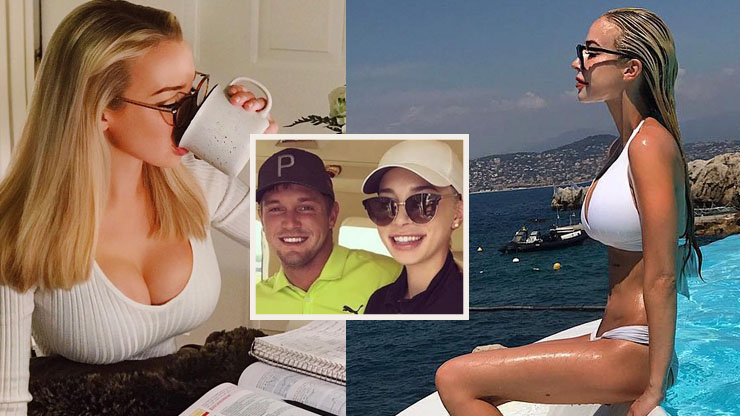 Bryson DeChambeau is a relatively young US golfer who took the world by storm winning the PGA Tour seven times and the 2020 U.S. Open. He is one of five players who have taken home the U.S. Amateur title and the NCAA Division I Championship in the same year. Bryson DeChambeau stands out in the gold world for his bulked up figure. While most golf stars are tall and lanky, it is evident that Bryson takes great pride working the gym. It's no wonder that plenty of girls want to know who is Bryson DeChambeau's wife.

He hasn't settled down yet, so for now, there is no Bryson DeChambeua wife, but he does have a long-term girlfriend who is a model and social media starlet.

Bryson is dating Sophia Phalen Bertolami who is known as an Instagram model. She is 27 which puts her at the same age as Bryson, and while no one knows for sure when the two started dating, it is clear she was Bryson DeChambeau's girlfriend before the 2018 Ryder Cup. She regularly posts photos of her boyfriend after he plays.

Sophia Phalen has built quite a following on her Instagram for her stunning figure and sexy selfies. She is not afraid to show off her body, and funnily enough, her very fat pig. In case you were wondering, you read that right. Sophia regularly posts photos of her gigantic pet pig Stella who at 1110 pounds weighs almost ten times as much as Sophia. She claims that she thought the pig was a mini-pig when she bought her, but clearly, after a year of constant growth, Stella is very much a giant pig.

Sophia Owns Her Own Swimwear Range

Bryson Dechambeau's girlfriend has no problem keeping busy while he is out on the golf course. She used her Instagram popularity to launch her own swimwear range known as La Isla. The range is aimed at bikinis for girls with a 'large cup' size.

While Sophia has built her business empire on looking sexy in bikinis on Instagram, she has the smarts to back it up. In 2014 she graduated from Chapman University with a degree in nutrition and kinesiology. She then attended nursing school and studied pharmacology in Nashville at Belmont University. These days though, when she is not designing new bathing suits she is likely to be found hanging out with Stella or watching her boyfriend Bryson DeChambuea out on the course.