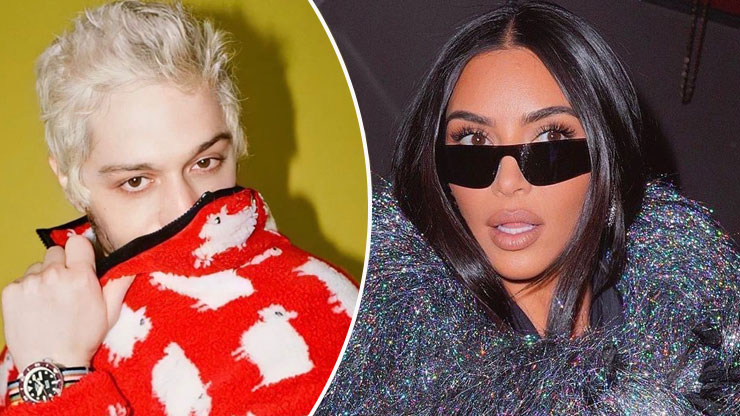 It looks like Kim Kardashian West may have gotten more from her recent SNL hosting gig than just a round of applause. The SKIMS mogul is rumored to be dating Saturday Night Live cast member Pete Davidson after being spotted with the comedian several times over the past couple weeks, first strolling through a California theme park holding hands before going out to dinner twice back in NYC.

While some fans claim they saw chemistry when Kardashian West and Davidson smooched as part of an Aladdin-inspired sketch on the late-night comedy show, others were shocked that the recently separated mother of four was interested in the self-deprecating funnyman. Davidson is known for his wry sense of humor, numerous tattoos, and laid back style as well as being refreshingly up front about his struggles with mental illness and Crohn’s disease.

Perhaps the fact that the jokester is such a departure from ex Kanye West is part of the appeal?

“
If reality star Kim is in fact head over heels for Davidson, she would be the latest in a long line of famous girlfriends

At any rate, if reality star Kim is in fact head over heels for Davidson, she would be the latest in a long line of famous girlfriends. The Staten Island native has reported dated Cazzie David (comedian Larry David’s daughter) and was engaged to pop singer Ariana Grande before the two broke up just four months after Davidson popped the question while the couple lounged in bed.

The writer and producer then went on to romance actress Kate Beckinsale, a match that made its own waves thanks to a 20-year age gap, followed by actress Andie MacDowell’s daughter Margaret Qualley, supermodel Cindy Crawford’s fashionista daughter Kaia Gerber, and Bridgerton’s breakout lead Phoebe Dynevor.

ADVERTISEMENT
“
The relationship with Grande even inspired her chart-topping hit “Thank U, Next.”

The relationship with Grande even inspired her chart-topping hit “Thank U, Next.” The catchy track celebrated Grande’s past loves and recent singlehood and contained the line, “Even almost got married/And for Pete I’m so thankful.”

While it remains to be seen whether Kete (or is it Pim?) are in it for the long haul or just hooking up, some celebs are already “stanning” the unlikely duo. Outspoken social media influencer and cookbook author Chrissy Teigen told TMZ that she doesn’t know whether pal Kim K is dating Davidson, but that it could be a good fit. “Funny guys do a lot,” said Teigen. “Look at John Legend, Teigen’s husband. He’s hysterical.” Davidson’s ex Kate Beckinsale seems to agree. The stunning Underworld star subtly showed support for one-time love by liking a tweet that said, “I love how ever time Pete Davidson starts dating another beautiful celebrity everyone’s like ‘wtf is happening how did he do this what is the mystery???’ and everybody refuses to entertain the possibility that he might have a nice personality.”