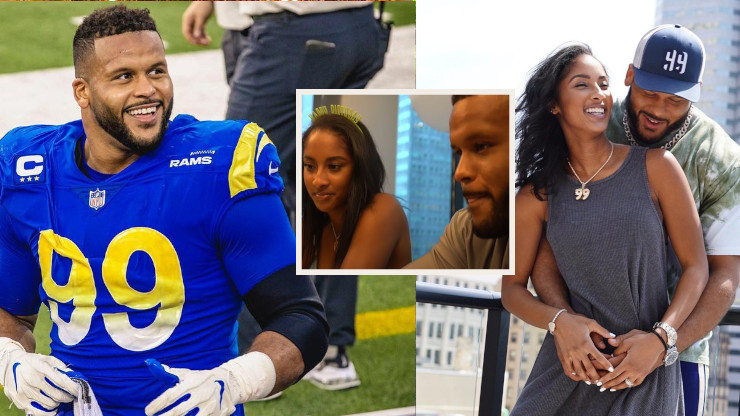 As an amazing defense tackle for the L.A. Rams, Aaron Donald has given the NFL a major player in the 7 years he’s been there. He even touts the nickname, “The Terminator” within the league. But recently, this big, tough guy has found a softer side of life, getting engaged to his girlfriend since 2019, Rams marketing manager, Erica Sherman. While the 2 have kept mum on when and where the wedding is happening, it is speculated it is sometime this year.

In a big twist of irony, though Erica is a marketing media mogul, she herself could be found absolutely nowhere on social media until recently. This seemed to be the case even before she and Aaron got together. Because of the social media absence, it’s hard to know much about Erica or her relationship with Aaron. The only time we would see her on socials is when Aaron would occasionally post about her. Recently, she’s created an Instagram page, which is how we found out this past spring that Erica is not only engaged to Aaron, but also pregnant with his child.

Erica may have met Aaron when her career path was already impressive, but since then, she’s taken on more high-set roles. The LSU graduate is now VP of Game1’s Athlete Partnerships Division, which focuses on sports intermingling with Hollywood, and she’s also Aaron’s sole marketing manager. But if that wasn’t enough, Erica finds time to be involved with major foundations who give back to underprivileged cities.

Aaron has been in a long-term relationship before and comes with 2 kids from that previous time. But even though his courtship with Erica seems like it was fast, she seems to have settled into his life quite well. She lives with Aaron in California along with his 2 kids, and they all seem to have a really happy relationship together. She and Aaron both have posted plenty of snaps with her step kids, including frequent weekend trips to Disney Land.