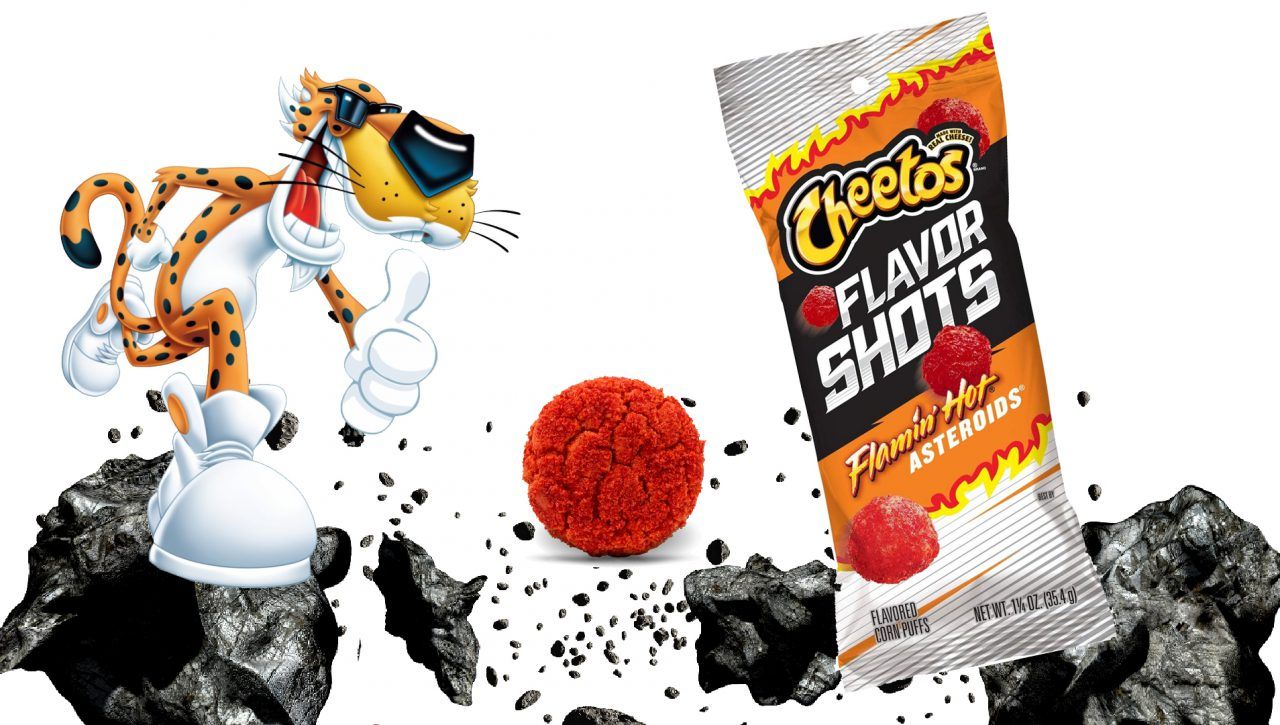 Everyone is wondering what these new cheetos asteroids are all about. The finger-licking asteroids balls will tingle your taste buds.

If you're a snack enthusiast, you probably feel a pang of nostalgia when remembering the Hot Cheetos Asteroid Balls. These satisfied your appetite for quick treats back in 2000. After a decade of absence in retail stores, Frito-Lay has once again resurrected the new Cheetos Flamin Hot Asteroid Balls. Now available in all three compelling flavors. Still, the new line retains the same tastes in a portable pack, only that the company chose rectangular pouches, instead of the old cylindrical cans.

In 2019, Cheetos hot asteroids have taken consumers by storm, spoiling their appetite for other alternative options. Among the significant differences include the shapes and taste of the Cheetos on-the-go snack. Unlike the previous squiggle-shaped Cheetos, the new asteroid-balls are shaped virtually like perfect spheres. Furthermore, Frito-Lay announced that it's the Flamin Hot Asteroids will be part of its line of Doritos and Cheetos Flavor Shots, which also feature three Doritos flavors that include Flamin' hot nacho cheese-flavored peanuts, fiery Habanero triangles, and nacho cheese flavored coated nuts.

The finger-licking, scarlet-hued, hot cheetos flavor shots asteroids balls have had a devoted following, not only because of their savory flavorings that tingle your taste buds but also for their nutritional value.

For every ounce serving of the crispy Cheetos asteroid balls, you consume 200 calories, 19g net carbs, 13g of fat, and 320g of sodium. The Cheetos asteroids are created to offer a saltier, keto-friendly snack that provides the required amount of nutrients to help one's pleasure centers in the brain respond better than if they were chowing down a handful of peanuts.

PepsiCo, the mother company to Frito Lay, made a press release on 7th March 2019, announcing the new snack flavors under its Doritos and Cheetos Nut and Asteroid Ball collection. The firm described the newly-released pouches that offer portability, making it easy for foodies to consumer them on-the-fly.

The different flavors and "on-the-go" convenience have made many consumers to give the new snack goodness a warm reception, particularly on social media. On Tweeter, for instance, @princesserikaa tweeted, "Where can I buy the new Cheetos flavor shots? Asking for myself."

@bbygains tweeted, "Someone please let me know where I can get the hot Cheetos flavor shots."

@ahhhhhhhhhdrey tweeted, "If you notice me driving around town to every gas station looking for @ChesterCheetah flavor shots asteroids; please mind your business and let me cop some right now."

Several weeks following their release in January 2019, even KFC began testing their food offerings with a mix of the Cheetos Chicken Sandwich to their consumers in North Carolina and Virginia.

As per the news release by PepsiCo's Frito Lay, the pouches of our beloved spicy hot cheetos asteroids balls are available in major retail stores, both online and brick-n-mortar. Every bag of cheetos flavor shots asteroids has a recommended retail price of $1.19.

Examples of online stores that sell the savory Cheetos flavor shots include Amazon, eBay, Walmart, Target, among others. On each of these websites, you can search for your favorite Cheetos flavor, and get a brief product description. Read it and then add to your shopping cart. Some sites like Target create descriptions that suggest accompaniments for the snack: salsa or queso dip.

Considering the boom of the new Doritos and Cheetos Flamin Hot Flavor Shots, it shows that the frenzy about the snack will continue even into 2020 and beyond. A bite of the Cheetos asteroid balls sends your palate into a tasty and spicy affair, which lasts for a while. Besides, that's what Cheetos fans are looking for in the flamin hot cheetos asteroids balls