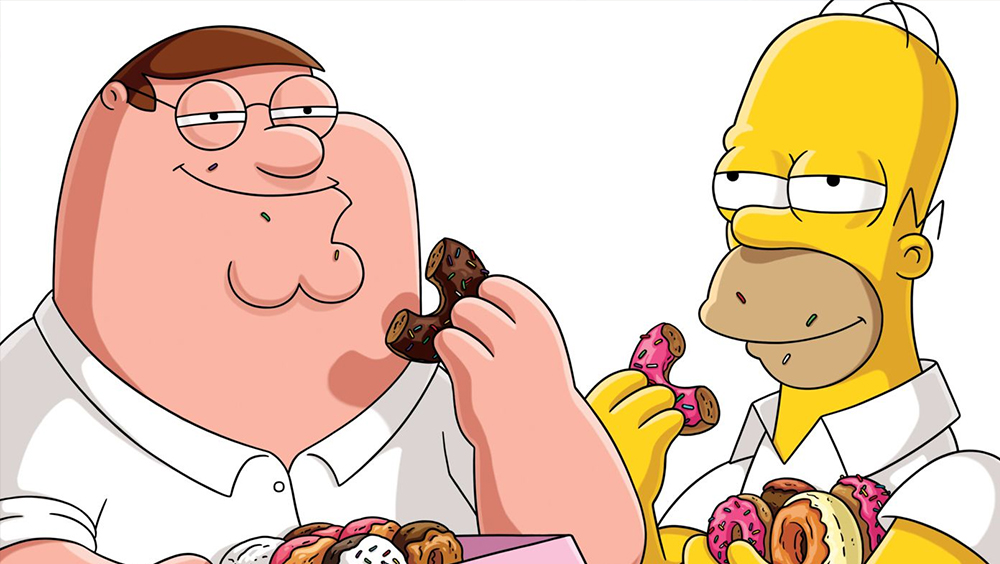 Call them stocky, chubby, cuddly, or just big-boned — these iconic characters have wormed their way into the hearts and minds of millions of adoring fans. So just who are the best fat cartoon characters on TV?
Here’s our take. Who did we miss?

The original fat dad, Homer Simpson does everything a good role model isn’t supposed to do, like downing a dozen doughnuts at a time and drinking too much beer with his buddies at the bar. But maybe that’s what makes him so relatable. He might not be a textbook father figure to Bart, Lisa, and Maggie, but he’s refreshingly normal, and there’s a lot to be said for that.

Who hasn’t had a day that made them want to bury their feelings in pizza and pie? Garfield is a fat cat who lives like a king thanks to his owner Jon’s willingness to provide a constant stream of pasta, coffee, and love. Most people don’t realize or remember that Garfield was born in the kitchen of Mama Leoni’s Italian Restaurant, which explains his affection for lasagna.

He may have had a career in hard labor working a blue-collar job as a brontosaurus crane operator at Slate Rock and Gravel Company, but all that sweat equity couldn’t compete with regular trips to the drive-in for a heaping helping of mammoth ribs.

Fred was a true caveman, but his love for his family and best bud Barney always shone through.

“I’m not fat, I’m big-boned!” and “I’m not fat! I just haven’t grown into my body yet!” are just two iconic lines uttered by everybody’s favorite oversized South Park resident Eric Cartman. He’s the loud-mouthed kiddo people love to hate, but it’s no surprise he’s a little angry from time to time — he’s been stuck in elementary school for more than 20 seasons.

Oh, bother. What’s a list of body-positive cartoon characters without the endlessly adorable and ab-challenged Winnie the Pooh? Pooh Bear might be chubby enough to make finding pants a bit of a challenge, but he’s a good pal to his friends in the Hundred Acre Wood and isn’t afraid to go face-first into a pot of honey, and that’s pretty awesome.

Is Pumbaa really fat? The truly hefty don’t survive for long in the wilds of Africa, but Disney’s smelliest warthog definitely has some mass around the middle, so he’s worth mentioning. Besides, his tendency to toot into the wind is hilarious, and everyone needs a funny friend with tusks in their posse, right?

He’s a Family Guy, a bit of a slob, and believed by many fans to be inspired by Homer Simpson, so it’s fitting that Peter Griffin is a fat guy who loves his kids, his wife, and his beer. The difference between Homer and Peter is that Peter is way more awkward, inappropriate and impulsive, and that’s saying a lot.