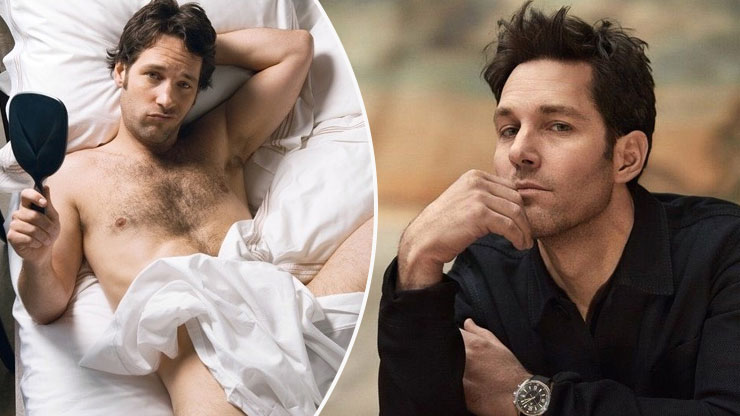 PEOPLE has just bestowed their most coveted title on the ageless actor, who at 52 looks much the same as he did when he first broke into the film industry in his 20s.

The hardworking but legendarily humble star seemed to be surprised by the magazine’s announcement, telling the publication he expects people to question his sexy status. “This is not false humility,” Rudd quipped.” There are so many people that should get this before me.”

No word on who Rudd feels exceeds his own personal sexiness, but the famously friendly leading man says he’s “going to lean into” the situation. “I’m going to own this,” he hilariously told PEOPLE. “I’m not going to try to be like ‘Oh, I’m so modest.’ I’m getting business cards made. But all of my friends will destroy me and I expect them to. And that’s why they’re my friends.”

Rudd’s wife, Julie Yaeger, might have a different take. The loved-up couple has been married for nearly 20 years and share two children, Jack and Darby, born in 2006 and 2010 respectively.

ADVERTISEMENT
“
Rudd’s wife, Julie Yaeger, might have a different take

Fans of Rudd and his body of work (pun intended) will likely be thrilled to see their favorite actor get some highly publicized respect. In addition to starring in such mega hits as Clueless, Romeo + Juliet, The Object of My Affection, Wet Hot American Summer, Anchorman: The Legend of Ron Burgundy, The 40-Year-Old Virgin, Reno 911, Knocked Up, Walk Hard: The Dewey Cox Story, Role Models, Dinner for Schmucks, Ant-Man, Avengers: Endgame, Sisters, Friends, Robot Chicken, and Parks and Recreation, the likable goofball with a heart of gold is also a philanthropist and avid sports fan.

Though Rudd was born in New Jersey, he went to school at the University of Kansas and is a major support of local Kansas City teams, even narrating an HBO special on the Kansas City Chiefs called Hard Knocks. He also founded a celebrity sports-centric event called The Big Slick that raises funds for Kansas City’s Children’s Mercy Hospital and works closely with the nonprofit Stuttering Association for the Young (SAY).

For those who aren’t already swooning, Rudd also joined forces with equally hot actor buddy Jeffrey Dean Morgan to buy a candy store in upstate New York, where Rudd and his family are based, after their friend (who owned the shop) suddenly passed away. Rudd is currently starring in the latest movie in the Ghostbusters franchise, Netflix’s Ghostbusters: Afterlife, with a new Ant-Man film due in 2023.