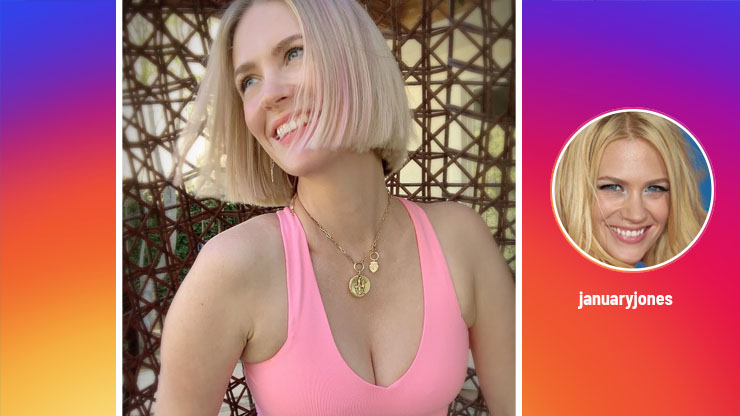 Best known for her role as Betty Draper in Mad Men, January Jones is an American actress whose rise to fame began with a series of supporting roles in box office smashes such as Anger Management and Love, Actually. She went on to accept other roles and continues to enjoy success to this day.

Known for her supporting roles in films such as Anger Management and Love, Actually, January Jones has enjoyed a successful career that allowed her name to be put on the map. Her other roles included Dirty Dancing: Havana Nights in 2005 along with a lead role as Carol Dawson three years later in We Are Marshall.

January Jones was born as January Kristen Jones in Sioux Falls, South Dakota on January 5, 1978, making her 42 years old to date. She was named after the lead character January Wayne in the novel Once is Not Enough by Jacqueline Susann. Her mother, Karen Cox, was a store manager while her father, Marvin Jones, had been a fitness guru and instructor at a local gym. In 1979, they made the move to the town of Hecla but soon moved back to Sioux Falls in the mid-to-late 1980s, where she enrolled in and graduated from Roosevelt High School before embarking on her acting career.

Not much is known about her early life, but it appears that January Jones led a modest one. She had two sisters, Jacey and Jina, the latter of whom followed her big sister's footsteps to pursue an acting career of her own.

Right after high school graduation, January Jones moved to New York City to become a fashion model despite her meager size of 5'6. She began modeling for Abercrombie & Fitch, where she appeared in various ads so she could make her way without the expense of a college education. Lack of experience did not stop her, and she soon discovered she had a flair for the camera as she starred in many commercial stints prior to making her big break in the 1999 indie production of All The Rage.

Her real break came when January Jones was asked to audition for the role of the quiet teaser in Bandits, where she attempts to tease her date, Troy Garity in the story. She was cast alongside Jane Fonda, Billy Bob Thornton, and other major stars, all of which helped her gain more in popularity and increase her reputation as a major film star. She continued accepting supporting roles for a number of years until the advent of her big break on Mad Men.

Mad Men and the Role of Betty Draper

January Jones created her own recipe for box office success: in the role of Betty Draper on the series Mad Men. It was there that she understood the difference between her characters and herself. Her decision to choose roles that were the opposite of her is perhaps the most compelling of all and appears to have made her an even better actress. Nevertheless, this role earned her two Golden Globes plus an Emmy nomination for Best Actress, both of which have really put her name on the map.

To Marry Or Not To Marry?

At the height of her career in 2001, January Jones had ended a brief romance with Ashton Kutcher, thus remaining single for a while. She eventually returned to dating but nothing has led to marriage to this date. However, she gave birth to a son, Xander during the filming of the fifth season of Mad Men. The name of the father was never announced, but she continues to act to this day while raising him.