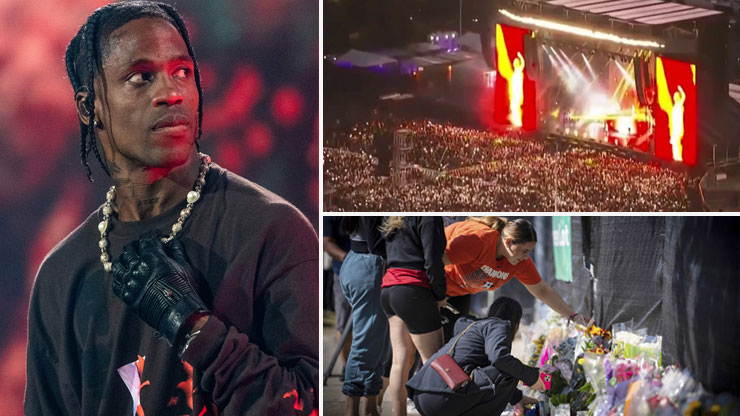 For fans attending Travis Scott’s Astroworld Festival in Houston last Friday, November 5, what was supposed to be a fun-filled night soon turned into a “whirlpool” of horror.

A huge stampede killed at least eight people and sent countless others to the hospital for treatment. Onlookers say that the nearly 50,000-strong crowd suddenly surged forward, and as people collapsed, friends and other concertgoers lifted them up and attempted to “crowd surf” them to safety.

It's still unclear what caused the tragic incident, but many are questioning performer Travis Scott’s actions during and after the melee. While the rapper reportedly pressed pause during his act at several points to get medical attention for those injured, he stayed on stage far longer than some attendees think he should have. In fact, Scott claims he didn’t find out there was a major issue until hours after the concert ended.

That might explain why Scott was spotted heading into his Astroworld after party at Dave & Busters even as dozens of fans sought medical care. Sources close to the Billboard-topping artist,  born Jacques Bermon Webster II, told TMZ, “Travis didn’t know the severity of the situation when he arrived at the party… this remains consistent with the fact that no one including the police had publicly confirmed the gravity of the events that had taken place.”

Survivors of the disastrous evening have taken issue with Travis’ denial, arguing that people were visibly begging security and camera operators to stop the show.

Scott has since taken to Twitter to express his shock and share condolences. “I’m absolutely devastated by what took place last night,” he wrote. “My prayers go out to the families and all those impacted by what happened at Astroworld Festival. Houston PD has my total support as they continue to look into the tragic loss of life.”

ADVERTISEMENT
“
“My prayers go out to the families and all those impacted by what happened at Astroworld.” - Travis Scott

Kylie Jenner’s on-again off-again boyfriend signed off with “Love You All” and has also pledged to pay the funeral expenses for the eight fans who lost their lives, but critics say it’s not enough.

There are already multiple lawsuits filed against Scott and concert production company Live Nation and officials are questioning whether the venue had adequate security staff and medical personnel on hand. There are also reports that Scott continued to egg on the crowd even as people were clearly injured, though it’s not clear what Scott could actually see from his spot on stage.

ADVERTISEMENT
“
“My ribs were getting into the railing, basically impaled, and I was fearing for my life

While it remains to be seen whether Scott will face formal charges, fans like Bryan Espinoza, just 16, won’t forget the destruction and chaos anytime soon. “At one point my ribs were getting into the railing, basically impaled, and I was fearing for my life that I wasn’t going to make it,” said Espinoza, going on to he saw “hundreds of bodies on the floor already from people passing out, falling over the railing.”