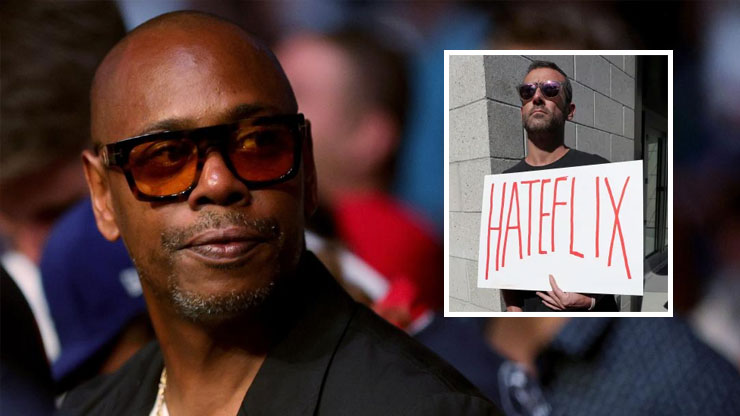 Comedian Dave Chappelle is no stranger to controversy, but his recent Netflix special has caused an avalanche of criticism that has the jokester looking for ways to make peace.

The Closer takes on a wide range of social issues, topics that are far from unusual for the outspoken Chappelle. But this time, viewers are calling his material transphobic, resulting in a walkout by employees upset that Netflix co-CEO Ted Sarandos sent around a memo that seemed to try and justify Chapelle’s comments.

Sarandos said the special wasn’t “designed to incite hate or violence,” while explaining that art like comedy represents a “very different standard of speech” compared to internal company culture.

In response to news of the walk out, Chappelle released a statement to TMZ saying he would be open to a conversation with disgruntled Netflix employees. While protest organizer Ashlee Marie Preston claims she tried to get Emmy award-winning funnyman to meet with them and he refused, Chappelle’s camp says the invite never happened.

As for the comments behind the uproar, Chappelle used his special to address the furor over Harry Potter author J.K. Rowling and joke about trans women, even discussing their genitalia. Chappelle insisted that “gender is a fact,” and said he’s a member of “team TERF,” an acronym that stands for trans-exclusionary radical feminist. Rowling was named a TERF after retweeting an op-ed discussing “people who menstruate.”

ADVERTISEMENT
“
“I’m sure there used to be a word for those people. Someone help me out. Wumben? Wimpund? Woomud?” - J.K. Rowling

In her June 2020 comments, Rowling said, “I’m sure there used to be a word for those people. Someone help me out. Wumben? Wimpund? Woomud?” The backlash was immediate with stars like Eddie Redmayne and all three actors from Rowling’s own Potter series speaking out against her viewpoint.

While some people in the trans community said they felt attacked by Chappelle, even telling CNN that the jokes were an example of “punching down” on an already marginalized population, others like Olympic athlete and former reality star Caitlyn Jenner disagree. Jenner released a video saying, “Dave Chappelle is 100% right. This isn’t about the LGBTQ movement. It’s about woke cancel culture run amok, trying to silence free speech.”

That support continued at the Netflix protest, where angry Netflix employees were met by Chappelle fans in a tense clash of words. Gigi Laroux, who was present at the event, showed up to support the man Esquire named a “comic genius of America.” Laroux told Variety that, “This boils down to equality, and if people want equality, they have to be put on the same level as anybody else. Comedians are equal opportunity destroyers. You can’t pick and choose who you’re going to make fun of.”

It remains to be seen whether a heart-to-heart will actually happen.