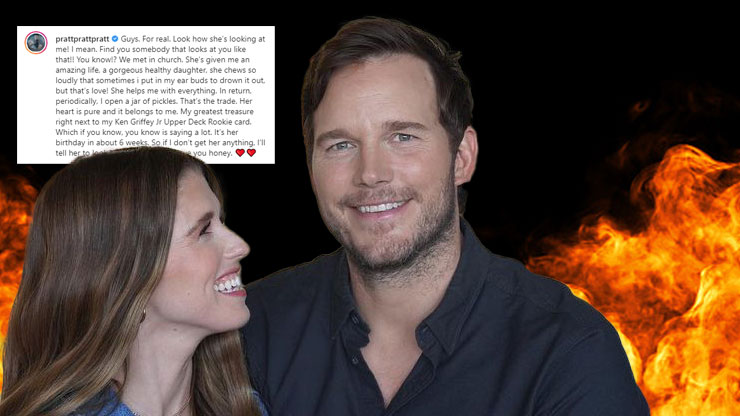 The internet is always watching… and judging… something actor Chris Pratt was quickly reminded of when his recent post about wife Katherine Schwarzenegger didn’t have the effect he was likely hoping for.

Pratt took to Instagram to wish his partner a happy birthday, pairing a photo of the happy couple with a lengthy caption that read, in part, “She’s given me an amazing life, a gorgeous healthy daughter, she chews so loudly that sometimes I put in my earbuds to drown it out, but that’s love!”

ADVERTISEMENT
“
“She’s given me an amazing life, a gorgeous healthy daughter, she chews so loudly that sometimes I put in my earbuds to drown it out, but that’s love!” - Chris Pratt

The jokey tone of the Guardians of the Galaxy super star’s tribute fell flat as followers immediately interpreted the remarks as a not-so-veiled insult to Pratt’s ex-wife, actress Anna Faris, and their son Jack. Now 9 years old, Jack was born nine weeks premature, weighing in at just 3 pounds 12 ounces. As a result, the youngster had to undergo numerous surgeries.

Fans were quick to call out Pratt, who made a name for himself on the sitcom Parks and Recreation, with Instagram user @thegrumpsnail commenting, “I notice the emphasis on her ‘giving’ you a ‘healthy’ child. It seems your first child wasn’t good enough.” Another follower called the post “cringe and vile”, while a third jumped in with, “For me it was the emphasis on ‘healthy child’ like your firstborn is lesser in your eyes. You need to go read that sentence thru HIS eyes & apologize to him bcuz your wording was cruel Dude…” [sic]

ADVERTISEMENT
“
Pratt hasn’t directly addressed the backlash, he shared a video the next day

It wasn’t just the “healthy” portion of Pratt’s post that got him in trouble, either. Some followers took issue with how the funnyman appeared to describe his wife as one of his possessions, saying, “[She’s] My greatest treasure right next to my Ken Griffey Jr Upper Deck Rookie card.”

Though Pratt hasn’t directly addressed the backlash, he shared a video the next day in which he said he “went to bed last night really kind of upset and depressed.” He credited Christian music and an outdoor run for improving his mood, suggesting any of his followers who might be struggling “maybe get in an exercise and maybe listen to some good worship music.”

ADVERTISEMENT
“
“I go to a church that opens its doors to absolutely everyone.” - Chris Pratt

This isn’t Pratt’s first brush with controversy. The devout Christian has gotten heat in the past for ties to the Hillsong Church, an organization that has been accused of anti-LGBTQ sentiment, though Pratt denies that, saying, “I go to a church that opens its doors to absolutely everyone.”

For now, it appears Pratt still has the support of his loved ones. His mother-in-law, journalist and former First Lady of California Maria Shriver, added her own comment to the now viral post. “I want to remind you today what a good man you are,” said Shriver, later continuing with a suggestion to “…keep being your wonderful self, rise above the noise.”